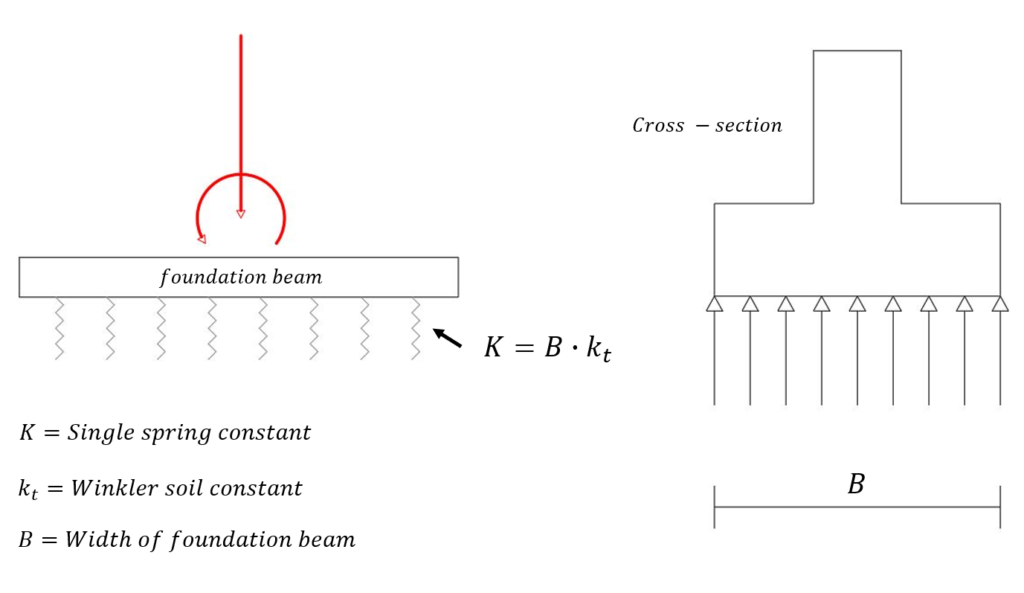 The structural calculation of buildings and infrastructures is often carried out using models which represent in a simplified way the constraints at the base of the structure. Even, in many cases, the structure is bound to the base with a rigid restraint.

However, this approach does not allow to analyse the actual stress state of foundations and in some cases it may also lead to an incorrect structural response evaluation of the above-ground structures. Using spring restraint can be an effective way to overcome these issues and obtain better prediction on structural behavior.

There are several advantages in modeling foundation supports with spring restraints. Among these, three main benefits can be highlighted:

You have the possibility to choose the spring constant according to the type of foundation soil. In addition, it is possible to assign springs with different stiffness in different portions of the boundary zone. Finally, you can define rotation spring constraints, which are useful, for example, to model the rotation of a plinth at the base of a column.

Use of spring constraints allows you to assess the correct size of deformation peaks and their position. Furthermore, it allows a correct calculation of the forces acting on foundation structures and consequently their correct sizing. No less important, you can consider soil-structure interaction and obtain realistic response of above-ground structures.

It is possible to analyse the structural response by evaluating different values of stiffness for the soil and the foundation members, obtaining envelopes acting forces. In this way it is possible to take into account the possible model uncertainties, due to the uncertanty in the knowledge of the soil type and its variability.

The Winkler model is based on the assumption that the soil, at a generic point, deforms proportionally to the normal force acting on it. The deformation is independent from that of the other points and is linearly dependent on the applied force.

, called soil constant, is a physical characteristic of the soil and must be measured in situ.

The Winkler model is particularly useful to model the behavior of elastic foundation beams, often employed as foundation structures in cases when foundation plinth is not suggested. If foundation beams is calculated considering the column as rigid restraints and the soil pressure as a distributed load, the bending moments and shear forces obtained, typically lead to an oversizing of foundation beams.

By employing elastic spring restraints based on Winkler soil constant, more accurate results can be obtained. In the figure below, a schematic representation of a Winkler beam foundation is represented. The stiffness of the spring is the soil constant multiplied to the width of the beam.

Here we show an example of a foundation beam calculation using Winkler soil supports. The system studied is shown in the figure below. The beam is subject to a distributed action due to dead loads. In addition, the columns exert concentrated shear actions and bending moments at some sections of the beam. The example is taken from the work of Colajanni et al. [1].

The model has been built and solved using WeStatiX. If you want to learn how to create a Winkler beam model take a look at this and other examples and tutorial.

After modelling the beam geometry, the distributed and nodal loads were applied. The Winkler support was inserted by applying elastic members constraints. Doing this, once beam discretization was performed, the code applied nodal constraint with stiffness

at the beam nodes. Diagrams of significant results are shown below:

In particular, the diagram of vertical displacements:

It can be seen that vertical displacement is not constant, but presents peaks whose intensity can be accurately evaluatued employing this modeling strategy.

Knowing the exact distribution of shear and bending actions in the beam, proper design choices are adopted and unnecessary oversizing can be avoided. Moreover, several calculations can be performed to evaluate structural response considering uncertainty in the soil stiffness, so obtaining an envelop of an action values for the foundation beam.

The obtained results concide with analytical solutions presented in [1]. You can check the accuracy of WeStatiX solution by take a look at the validation test of Winkler supports.